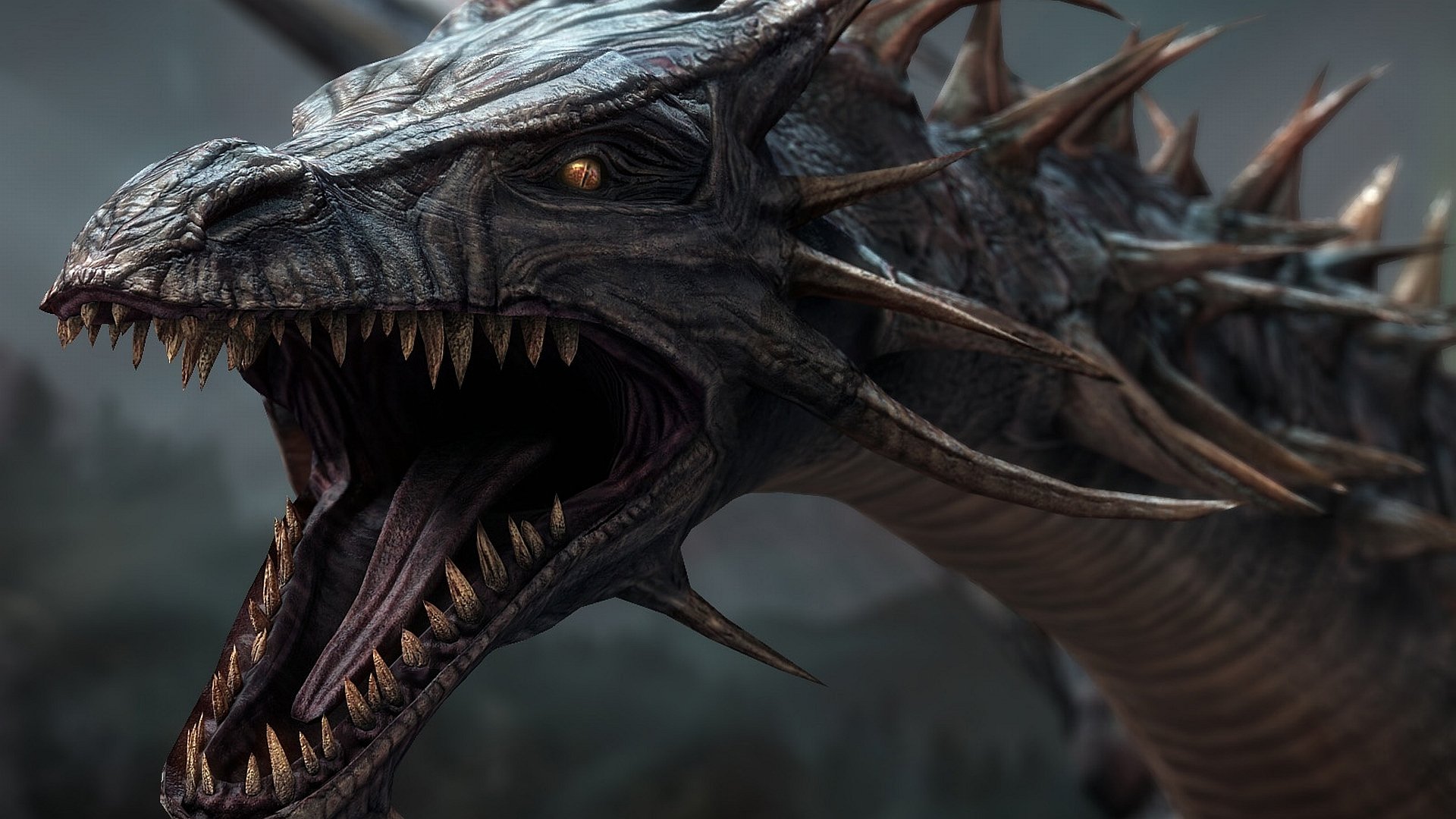 The leading firms of the digital economy outscore not only their competition by revenue and growth, but leave whole industries behind. This is creating unbalanced competitive environments; the majority of firms are fighting against frightening-powerful dragons, whilst, the few in lead, face unprecedented challenges to keep meeting investor’s growth expectations.

The size of a dragon?!

The combined market cap of Amazon, Apple, Facebook, and Google in 2015 was US$ 1’306’180’000’000.
The GDP of Spain is US$ 1’382’342’101’736.
Adding Alibaba.com, to the equation, the combined market cap of the five firms reaches US$ 1’861 Billion – this is the equivalent to Russia!
This simple numbers game does not only hold for the comparison to GDP of selected nations, but also in comparison to any of their competitors – combined.
The US$ 528 bln. the market capitalization of Google is equivalent to the combined market cap of Disney, Comcast, 20th century fox, directTV, WPP, CBS, Viacom, dentsu, Publigroup and IPG. amazon’s US$ 317bln. market capitalization is equal to the combined value of Walgreens Boots Allinance, Target, Marcy’s, Dufour, Kröger, Metro, Tesco, Fast Retailing, Tiffany&Co., Ralph Laurent (et al.)
The question is, if a bunch of companies, with an individual legacy between (only) 11 to 29 years can reach for the size of considerably normal nationsand create a higher equity value than almost all of their competition combined, what does this tell us about their path of growth, and also the future perspective?!

In just a few years, the leading protagonists of the digital transition have become the rule makers of the economic eco system.
For the period from April to October 2015, Google’s stock appreciated by 14.46% (Facebook11.51%). Over the same course of time, the S&P500 lost by 6.93%. From the investor’s perspective, Google tripled the performance of the market.
Investor’s perspective is one, market share, cash flow and revenues is the metric that really matters.
For the net mobile Internet ad revenues worldwide, in 2015 Google holds 34% and Facebook 17% market share. Together these two companies command 51% of the global market. In mobile phone market, Apple took in 2015 92% of the market’s profit outscoring Samsung as the market’s second with 15% of share of profits by 6 times. In e-commerce Amazon has been declassifying the competition. From Nov to Dec 2015 Amazon generated 42.7% of all US online sales, whilst the next top 10 resellers were left with 24.9%. Also, in Europe, the Top 10 Internet retailers were dominated by Amazon, with EUR 21.1 bln of web sales in 2014, translating in a market share of 43.2% and leaving the following nine companies with EUR 27.7 blns. in sales combined. 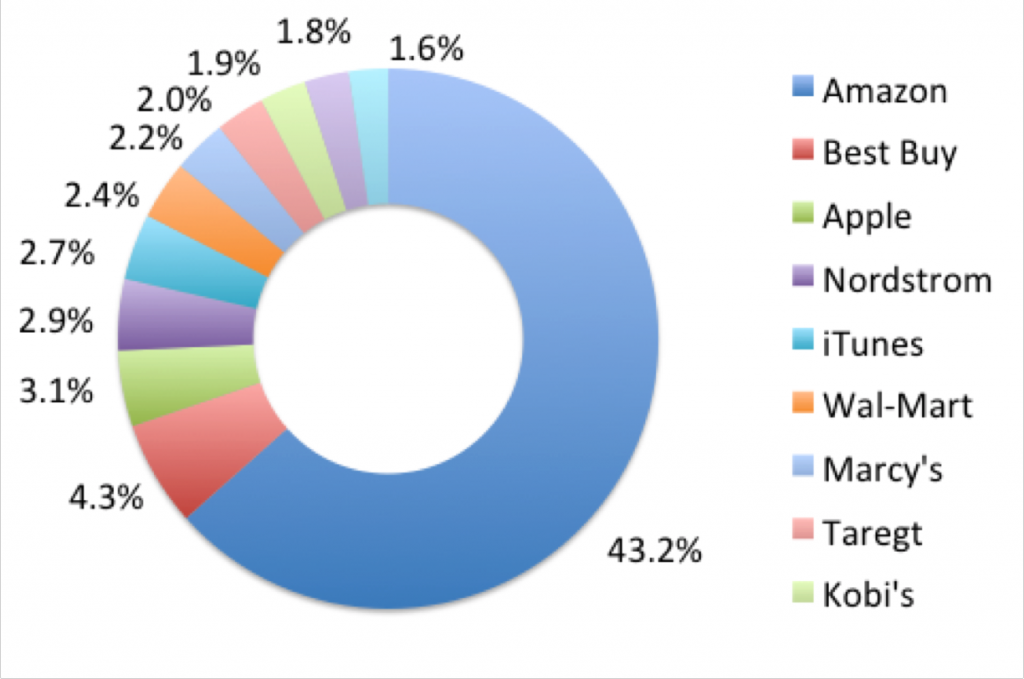 When it comes to growth, Apple grew In terms of revenue, from 2014 to 2015 by US$ 51.1 bln. This equals to the combined full annual revenue 2014 of Louis Vuitton (US$ 10.1 bln), Kering (US$ 11.1 bln), Richmont (US$ 11.4 bln), Coach (US$ 4.2 bln), Michael Kors (US$ 4.3 bln), Hermes (US$ 4.5 bln) and Prada (US$ 3.9 bln). All of these companies leave their very own footprint in their specific field, hence, command a sustain business model; however, Apple just added their combined total achievements in sales to the own revenue as growth.
The critical challenge is for these companies, to deliver on their ambitious business plans and market evaluations and continue to perform on the same rate of growth.
For the dragons, rats and goats are a nice meal, when freshly hatched from the egg. After a while, a decent dragon needs to enjoy the feeling of saturation…..maybe a city?!
Hence, it is not a question, IF Google, Amazon, Apple and Facebook will start to engage into payment, automotive, transportation, TV…….., just the question is, WHEN the appetite for growth will lead them, sniffing for attractive ROI to each specific industry.

No Siegfrieds out there?

Saving the kingdom from the frightening, almighty monster is quite a compelling proposition. Hence, sponsor’s for armory and weaponry are easy to be found.
For the hero’s of economy this translates into daring business models, pitched to the VC community, with the promise, to participate on the ever-growing markets for e-commerce, digital services, electronic beacons or social media. Interest rates are down, hence, investment spirit is up and investors to fund new ventures are easy to be found.
In 2015, the VC eco system in the US hit an ever high. Around US$ 77.3 billion have been invested through some 8’000+ financings.
However, by Q4 of the same year, only 176 VC exits were recorded – the lowest since 2011.
Like the expedition to the dragons cave, in the lure of glory,many go out there, but few ever return.

Just understanding the figures, any attempt, to get into head to head competition with one of these firms would be a sign of unprecedented stupidity. This holds for start ups, but just as well for established firms, who might end up in a head to head competition situation, before recognising. Apple was estimated on average to have sold 2.53 million iWatches in Q2 /2015 (top estimate was 3.6 millions). In parallel, Swiss watch exports dropped by 12% and reached a six-year low point, resulting in job cuts in the industry.
It appears to be a sure bet, having asked any given executive in the Swiss watch industry 12 months earlier, if Apple was going to be a would-be-competitor. The answer would have been most likely a sure “no”.
Another example is the recent analysis of corporate expenses, finding that Uber made up 41% of all ground transportation receipts, while car rentals constituted 39%. The remaining 20% went to taxis. Traditionally UBER is understood as disruptive competitor to the Taxi industry. Again, a sure bet would have been, to ask the rental car industry, if UBER might be of any threat to them. Again, guesses are, executives would have denied 12 month earlier, by now, UBER has bypassed them and is waving backwards.

Success stories and the pulse of the digital innovation is luring talents to the industry. In 2015, Google, Mircosoft, and Apple have been nominated as top3 employers by students and graduates. Young talents are likely to start their careers here.
But also for other generations of employees, the icons of the digital economy hold great attraction.
Companies like e.g. P&G, Unilever and L’Oreal keep losing staff to Google, Amazon and Facebook.

By cherry-picking and hiring educated and experienced managers from the traditional market participants, the digital firms exploit the corporate HR development of the industry. Slowly the skill level in the brick&mortar industries will dry up.
The story doesn’t end here: For many of the employees, the digital world is disappointing on the “happily ever after”-part of the fairy tale. Reality kicks in hard, when the performance ratios of stuff are analysed.
Whilst GM, as a cornerstone of US the economy, holds a market cap of US$ 46.22bn with 216’000 employees, which equals US$ 214K p.c., Amazon and UBER demonstrate a different standard of productivity with their stuff. Amazon reaches US$ 1.43 mln. and UBER even US$ 17.5 mln. market cap relative to the number of employees.

In addition to the general worry of any manager “howdotheydothis”, this holds another underlying news: Relatively less employees translates into definitely less consumers and less purchasing power in the market.
Slowly liquidity of consumer markets will dry up.

Inevitable the accelerated growth cycle of the leading digital firms will shape the landscape of whole industries, if not whole segments of the economy, according to their requirements and needs.
For business leaders it’d be a fatal error, not to anticipate the occurrence of one of the leading digital players in the very own industry. No matter, if it is farming, utilities, automotive, luxury goods, or any other, arbitrary chosen vertical with a relevant ROI-ratio, all conditions kept equal, it is a matter of time, until their appetite for growth will lead them to the door of the very own castle.
Leaving corporate strategy untouched by this consideration will leave you prey to the dragons.

How to ride the dragon?!

The relevance of thorough corporate as well digital strategy has dramatically increased. For all those, disregarding this, take a good last look at their businesses. They will be gone soon.
Essentials to position the own business in the upcoming turbulences include: